Corinthia started its journey as a fine dining restaurant in Attard, Malta in 1962. So food was the starting line of what would later develop into a large hotelier venture. When in summer of 2017 Island Caterers joined the Corinthia family it brought its own 25 years of experience.

Corinthia’s flights catering unit dates back to the inception of Air Malta. Currently, Corinthia Caterers serves the Emirates Airlines and the majority of private flights. For many years, Corinthia had offered catering service to a number of desert camps, city locations as well oil installations in remote desert locations in Libya where, in the late 90s, it employed over 1000 persons of various nationalities and served approximately 35,000 meals a day.

Corinthia Caterers is one of the largest catering operations in Malta and strives to maintain the highest quality of food offering and service. It is proud of its reputation.

Corinthia Caterers operates from one central production but provides its services all throughout Malta. Nonetheless, it has its own exclusive venues, which are very classy. One of its exclusive venues is Villa Bologna, a Baroque villa in Attard, Malta, which dates back to 1745.  Its elegant landscaped garden provides a sophisticated atmosphere for several hundreds guests. 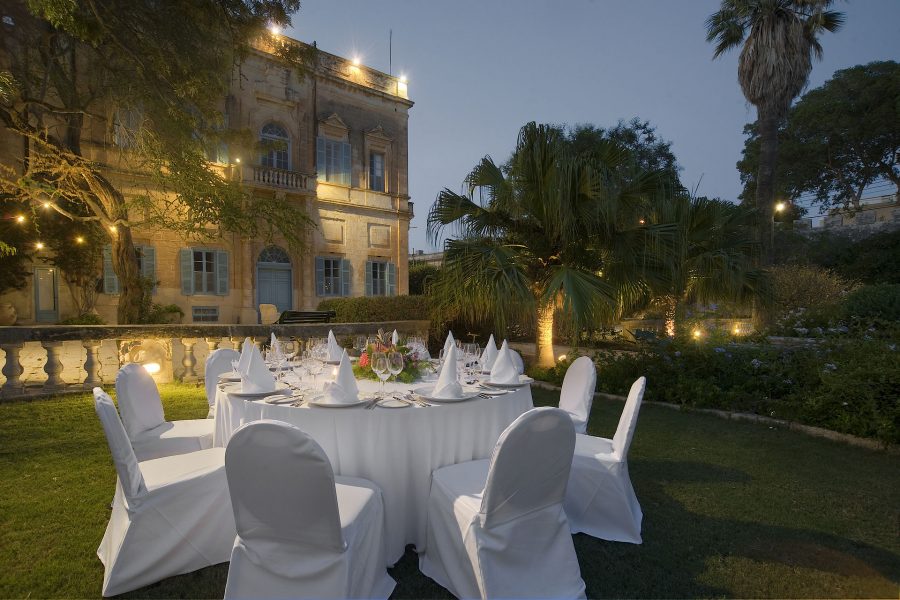 Another charming venue is the Saluting Battery in Valletta, Malta, which stands high on one of the 17th century historic bastions and commands a breathtaking view of the renowned Grand Harbour. 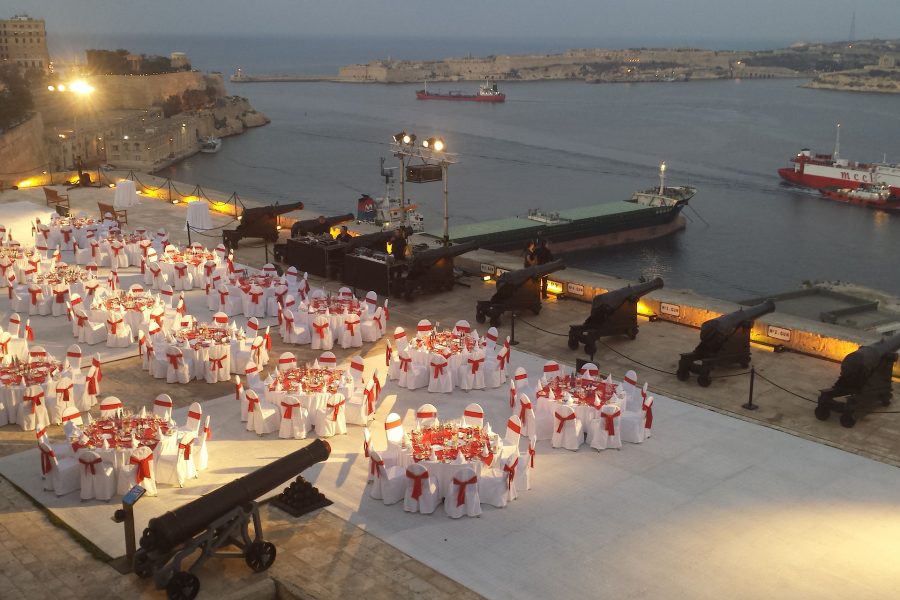 Limestone Heritage , too , is an exclusive venue. Situated in Siggiewi, Malta, this is a private museum which “offers a celebration of Malta’s vibrant history and its unique stone resource.” Malta has utilized its vast quantity of limestone to build its finest palaces, mighty bastions, statuaries, prehistoric temples and much more. Globigerina Limestone features prominently throughout Malta’s history since prehistoric times. The spacious gardens and open air museum offer an idyllic place for events. 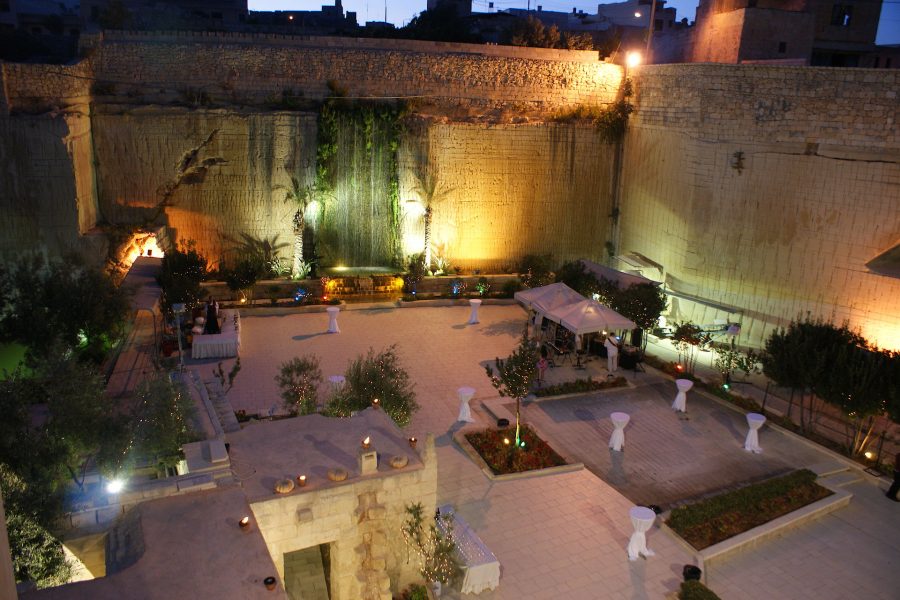 Then there is Castello Zammitello, a charming venue, which was built by Baron Bernardo Zammit in Norman style in 1675. It provided a watch against the common raids of corsairs which plagued Malta for hundreds of years. 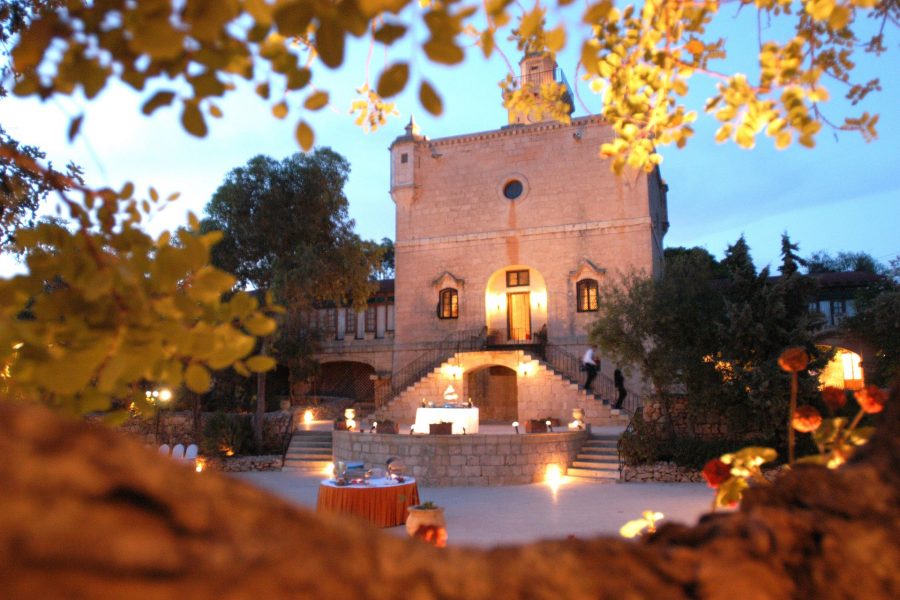 Another exclusive venue is Casino Maltese in Valletta. During the rule of the Order of the Knights of Malta these premises were used as the ‘Casa Del Commun Tesoro’ (Treasury), During the early days of British rule the premises housed the Chief Secretary’s Office, Government Treasury and the British packet office. Samuel T. Coleridge, the renowned poet and writer, worked in this place for a short period at the beginning of the 19th Century. During the late 1800s, the building was converted into ‘The Grand Hotel’ and at one point, part of it was occupied by Salinos Cinema, the second cinema to open in Malta. Since 1906 to date, the premises have been occupied by the Casino Maltese which modified the building to use as a club. 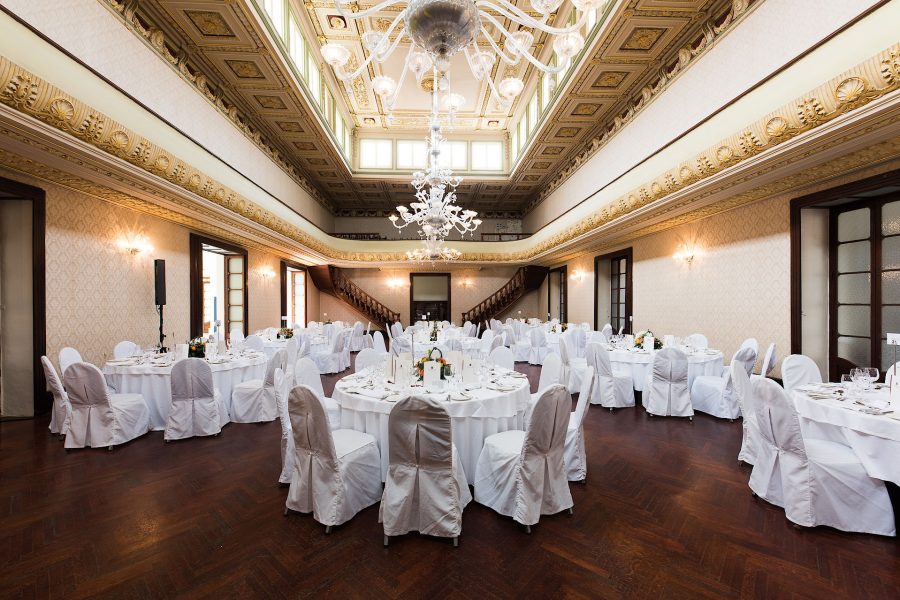 But as already stated, Corinthia Caterers is not tied down to these special venues. It also offers service in venues of customers’ choice and can set up a fully operational kitchen completely in line with Heath and Safety regulations.  In fact Corinthia Caterers has offered its services in many interesting and historic venues in Malta, such as Mistra Battery, Fort Rinella, Notre Dame Gate, Verdala Palace, Fort St Angelo, Fort St  Elmo, Villa Bighi, Pjazza Reġina in Valletta, the Floriana Granaries, Valletta Waterfront and the President’s Palace in Valletta. Naturally private residences are possible venues too. 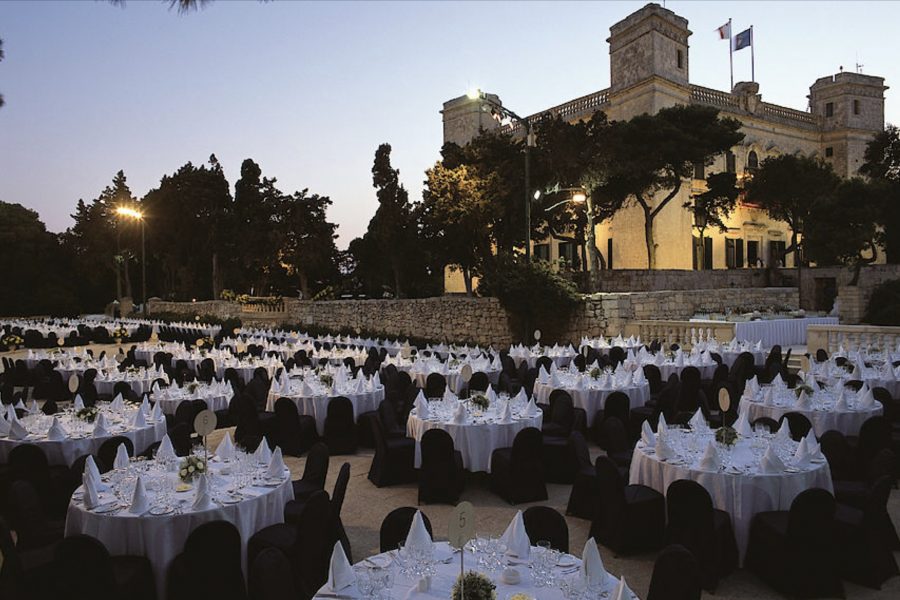 Weddings, conferences, and private parties are just some of the occasions where Corinthia Caterers operates. Conscious of the special nature which each event possesses, Corinthia’s team of chefs offers excellent advice and a  wide array of menus which set a  mark of distinction. 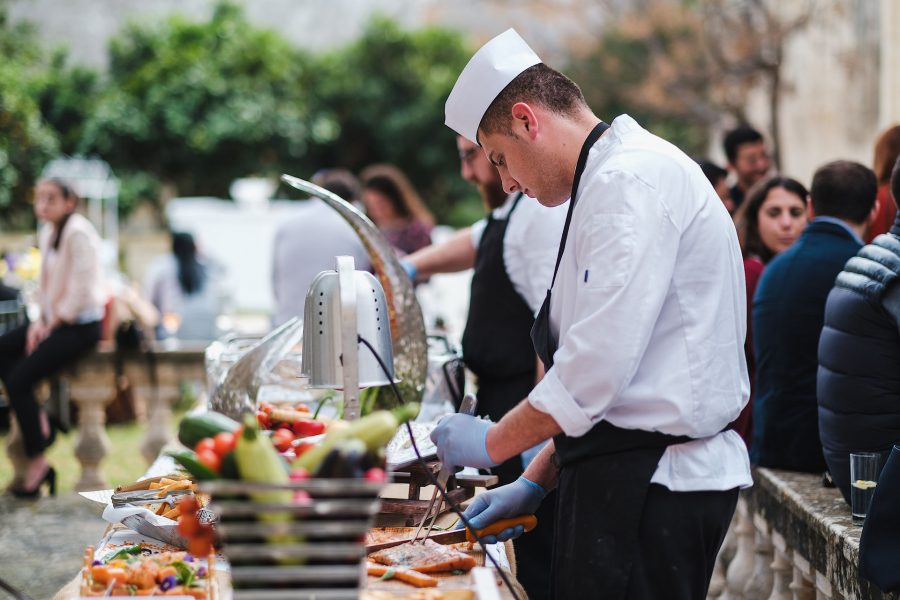 Highest standards are attained in all operations. The most stringent European standards and regulations are followed. Fully recyclable disposables are used and, wherever possible, local suppliers and producers are involved.

Corinthia Caterers are proud of their chefs who have received various international awards. Mr Reuben Miceli, Executive Head Chef, carries a long list of local and international achievements, such as the acclaimed Junior Chef Award (2006) and the Mediterranean Culinary Cup (2017). 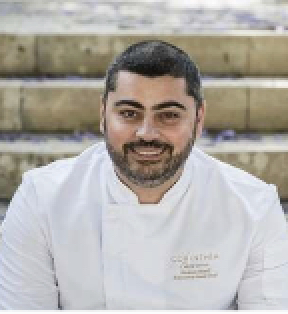 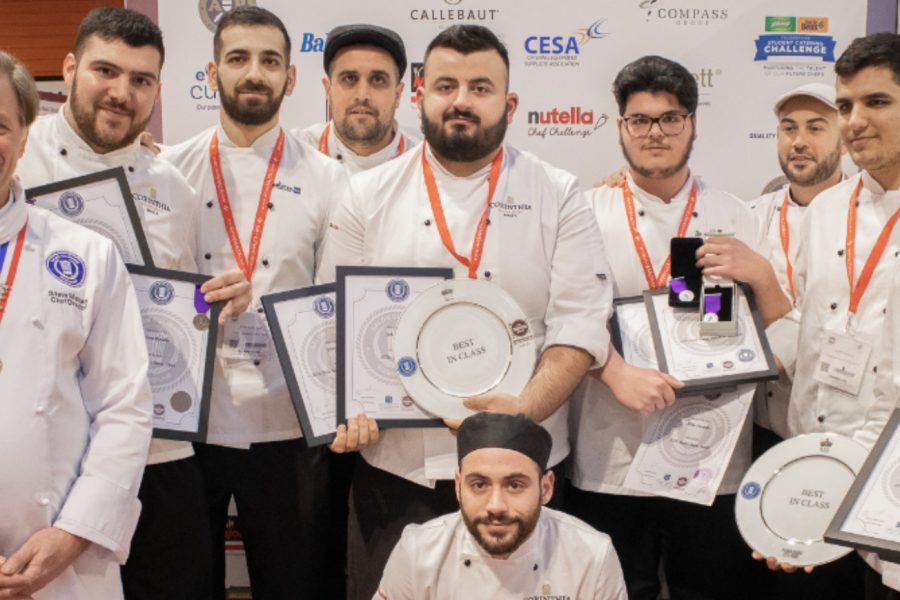 For these last four decades Corinthia has been leader in premium aviation catering, supplying in-flight services to commercial and private aircraft and airport lounges. The fact that Corinthia’s production unit is close to the airport ensures timely deliveries and full back-up support.

Insider Plus asked Mr Salvinu Farrell, Managing Director of Corinthia Caterers what are today’s major challenges for a catering industry in Malta? 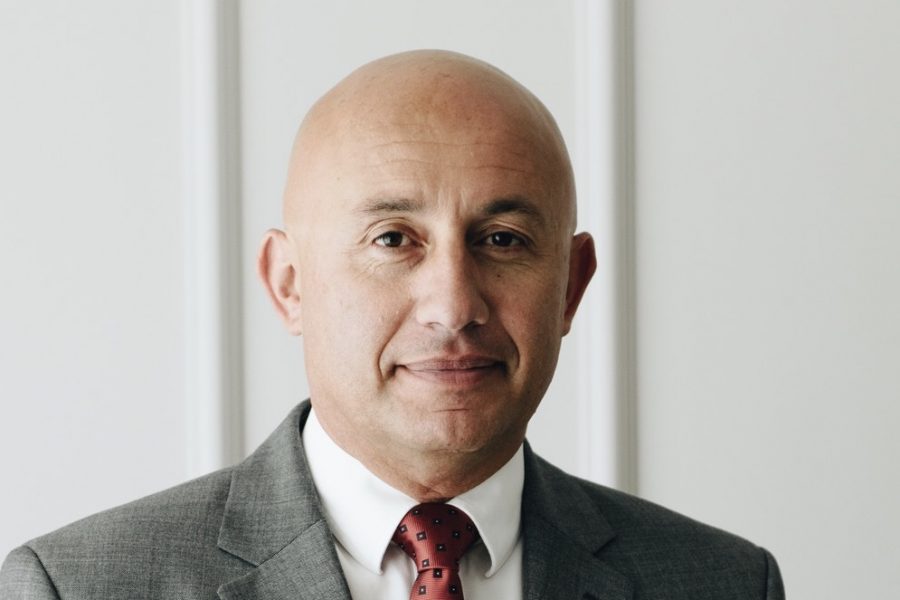 “I think that the major challenges are supply oriented. The biggest challenge is in the labour market where we have difficulty in finding trained staff especially in the service sector i.e. serving staff – barmen, waiters etc. Another challenge which might be somewhat surprising to highlight is the availability of products. There are times where there are shortages of a type of fruit or vegetable or fish for example which might not be obvious to the ordinary man in the street as the volumes that are bought for domestic purposes are minimal compared to having to cater for one thousand persons, where consistency of product and food offering is crucial 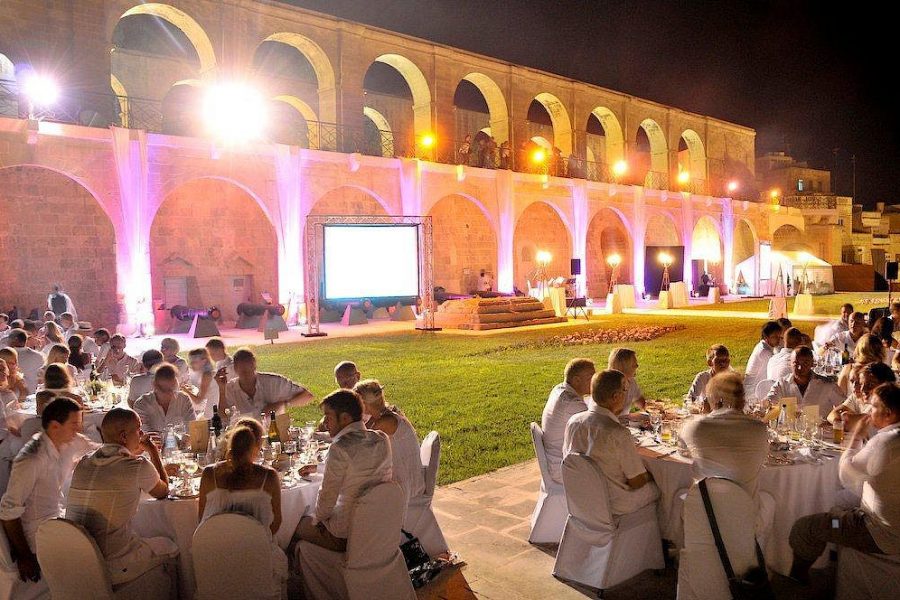 “Another challenge is seasonality and finding a balance between the high periods and the low periods is crucial in terms of manning especially. Thus for example the wedding season is at its peak in the early summer months whilst the MICE market peaks in the early months of the year and then in September and October.”

Asked how often Corinthia Caterers reviews its catering management systems and strategy, Mr Farrell, noted that “Catering is very dynamic with food trends changing all the time be it for health reasons or economic reasons or lifestyle reasons or a myriad other reasons.

“Catering management systems do not change in their basic substance but they need to be updated and kept apace with the times and the trends. So for example HACCP standards (food safety standards) have existed for many years but these still need to be updated because of new legislation or practices or new products coming into the market.

“With regards to strategy this is ‘dictated’ by the market and so if the market, a reflection of people’s lifestyles and tastes, dictates that the trend is to offer vegetarian or vegan options in menus, one would be unwise to turn a blind eye to these new trends and changes in people’s eating habits.”

The catering workforce must be quite numerous to handle all this. Mr Farrell  acknowledged and nodded. “ We have 180 full-timers and 130 part-timers.”

Knowing the vibrant and dynamic character of Mr Salvinu Farrell, Insider Plus asked him whether he envisaged new additional services or an increase in the exclusive venues. “We are always on the lookout for new opportunities to increase and diversify our revenue streams. In January we will be operating a new cafeteria at the recently opened St James Hospital in Zejtun, where we are exclusive caterers as we already cater for the hospital’s patients and staff and we are in talks with a hotel operator to take over the F&B operations in a new project scheduled to open in June 2020. We will also be willing to partner up with new exclusive venue owners as long as such venues add value to our already prestigious and diversified stable of venues keeping in mind that we are exclusive caterers at Villa Bologna, The Saluting Battery, Castello Zammitello, Casino Maltese and Limestone Heritage (Waterfall Gardens) amongst others, all of them unique and highly sought after venues in their own right”

And the future? Mr Salvinu Farrell’s took on a determined tone. “We look ahead with confidence.”