Corinthia Hotel London has announced that renowned British Michelin-starred Chef Tom Kerridge is to launch a new restaurant at the hotel, his first in London. The restaurant which will open later this year promises to be a brasserie-style dining room and will replace the Massimo Restaurant & Bar. With an entrance off Northumberland Avenue, the eatery will be fitted out by top international design firm the David Collins Studio. Commenting on the announcement, Thomas Kochs, Managing Director of Corinthia Hotel London, told Insider: “It is important to us to be an integral part of the city, and for our guests from London and internationally to experience true British hospitality.

“When we met Tom, we knew he was the perfect partner to open a restaurant together. We admire his approach to food, restaurants and his spirit of hospitality. I am confident that together we will create an incredible dining experience.”

Kerridge’s distinctive approach to what could be termed his ‘new British rustic cuisine’ will give Corinthia’s flagship hotel a rich and vibrant all-day brasserie, and with the celebrity chef’s star in the ascendancy, tables are likely to be as popular as his Michelin starred gastropubs in Buckinghamshire, where guests book months in advance.

“When we met Tom, we knew he was the perfect partner… We admire his approach to food, restaurants and his spirit of hospitality.”

After signing the contract, Kerridge said he was “incredibly excited” by the prospect of joining forces with Corinthia. “Corinthia Hotel London is one of London’s most prestigious hotels, and we are looking forward to doing what we do best – quality British cooking that is modern and exciting.”

He added that he also looked forward to bringing “a bit of what we are doing in Marlow to London”. Fifty kilometres west of central London, the town of Marlow is where his two Michelin-starred pubs are located. He opened his first gastropub The Hand and Flowers in 2005. Six years later it became the first pub to receive two stars in the iconic Michelin Guide; it remains the only British pub with more than one star. Following the Guide’s recognition, Kerridge as a brand has risen rapidly. In 2014, he opened The Coach which received its own Michelin star last year. His latest venture, The Butcher’s Tap, (a butchers by day and pub by night), opened in 2017.

Known for his infectious laugh and warm personality it was hardly surprising that in 2013 the BBC saw Tom’s potential for television. His first series Proper Pub Food was a huge overnight success and his first book of the same name became a best seller. In 2014, Tom presented his second series, Best Ever Dishes. More TV and books followed, as Tom’s fan base expanded, and 2018 will see him presenting a new BBC series that will promote Britain’s best amateur artisanal food producers.

“Corinthia Hotel London is one of London’s most prestigious hotels, and we are looking forward to doing what we do best – quality British cooking that is modern and exciting.”

Tom is the author of three other best-sellers, Best Ever Dishes and Tom’s Table and his most popular to date – The Dopamine Diet – a personal story of recipes that reflect Tom’s changed outlook to food in recent years and the diet he went on to lose more than 60 kilos.

A hallmark of Kerridge’s cooking is his focus on British favourites and hybrid interpretations of traditional recipes. Roasted whole quail stuffed with sausage meat; mussels in a creamy stout broth, and loin of venison with date purèe give a taste of things to come in London. As one food critic put it, Kerridge’s art is all about reinvention – distilling tastes in new and surprising ways. “Low on garnishes, high on polish: this is tapas-style eating applied to traditional British-French dishes.”

His bold, unpretentious cooking using fresh seasonal ingredients will undoubtedly bring a new flavour to Whitehall Place. And while Tom’s Marlow restaurants are known for their informality, it’s already clear the watchwords for his Corinthian creation will be ‘chic’ and ‘stylish’. Kerridge at Corinthia promises metropolitan sophistication and a brasserie that complements the refined elegance of its host.

Perhaps the man himself sums it up best. Asked to describe his philosophy as a restaurateur, Kerridge, never one for airs and graces, says: “I’m a big believer that food brings people together in a space where they can enjoy not just the flavours, but the company they’re with. I don’t go in for that ‘temple of gastronomy’ thing – I just want people to have a nice time, and that includes the warmth of hospitality.” 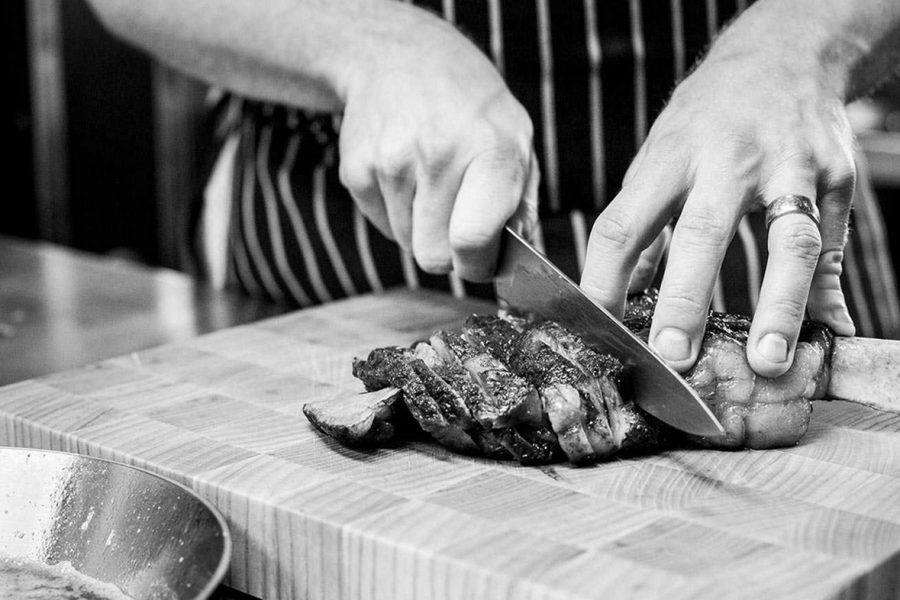