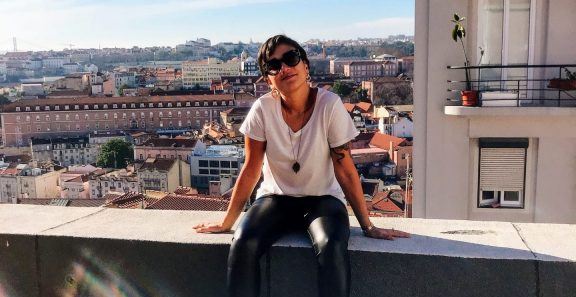 “Being an immigrant in a new country with no family or friends, the Corinthia family has become everything to me.” Ms Joana Jaeger, supervisor at Erva Restaurant, Corinthia Hotel Lisbon.

Insider Plus found those words very incisive and heartfelt, and queried Ms Jaeger’s background: “I was born and raised in Brasil, where I worked as a communications specialist for Petrobras, Brasil’s biggest Oil and Energy company, for 10 years, but food was always my life passion. So after a decade in my corporate job, I started studying to become a chef in one of the world’s best cooking schools, Alain Ducasse Formation, which had a branch in Rio de Janeiro. I quit my job and took an internship in a Michelin Star restaurant, Olympe, run by chef Claude Troisgros. His father and uncle had revolutionised French cuisine in the 60s, creating the nouvelle cuisine. I was incredibly excited! It was a  great experience. After about a year, I moved to London, where I worked as a chef for Jason Atherton, the British chef and restauranteur with multiple Michelin stars to his name, and with the celebrated Spanish chef  Albert Adriá’s 50 Days pop up at Hotel Café Royal and Colbert, owned by Corbin & King This company eventually became my home for almost three years. Being a chef is really hard, especially when you start doing it in your 30s. My body just couldn’t cope with it any longer. However, I was determined to never leave the hospitality business, so I asked Corbin & King for an opportunity as Front of House, that is where all the interaction with guests will occur. I then started as assistant Maitre D’ at Fischer’s and worked my way up to the Delaunay, in Covent Garden, as Senior Maitre D’.”

Ms Jaeger had not yet worked in a hotel. How did she join Corinthia Hotel? She smiled broadly and admitted: “Honestly, I never really thought about working in hotels, as I had been so focused on restaurants my entire life. But when I was offered the opportunity to be part of the opening team of Kerridge’s Bar and Grill at the Corinthia London, I just knew I had to take it. It was a gut feeling which told me: go on, don’t miss it. That was August 2018; at first it was all about Chef Tom Kerridge and his fabulous food, but very quickly I came to realise that working at the Corinthia London would be a life-changing experience for me. I was meeting many inspiring people there: Thomas Kochs, Ben Hoffer, Simon Coulson, Tomas Kubart, Matthew O’Connor… Some are still there, some are not. I had never seen a team more determined to create incredible experiences for our guests. The level of service was remarkable and I was in awe of everything. Then I had to go back to Brasil for a while, but soon relocated to Lisbon.  I just knew that I had to continue on that inspiring journey.  I started again at Corinthia Lisbon in April 2019, and here I am.”

Ms Jaeger is currently supervisor at the Erva Restaurant in Corinthia Hotel Lisbon. Was this a recent appointment? “My promotion to restaurant supervisor came just a couple of months before the world went into lockdown due to Covid in March 2020. During that period, Ms Cheila Queiros, our Restaurant Director, and I took the opportunity to review and update all of Erva’s procedures. I would say a major part of my job is to make sure that our team follows those procedures as well as the Leading Quality Assurance (LQA) standards. However, re-opening the hotel in July 2020 with a much smaller team presented us with a new set of challenges”

Insider Plus reminded her of the words oft-repeated by Mr Alfred Pisani, Chairman of Corinthia: ‘Some  obstacles are made in Heaven after all.’  Ms Jaeger nodded vigorously. “So true! It turned out to be a truly unique situation and a remarkable and speedy learning curve. Before starting at Erva in April 2019, I had never really worked as a server. Now, due to the restrictions imposed to us, we all had to learn and adapt quite quickly. In the first few weeks after the hotel re-opened, I would be setting up a breakfast buffet at 6am and two days later I would be closing our gorgeous Soul Garden bar at 2am. The success of Erva over the summer put me in a more stable position, focused only on the restaurant, but even now during a busy service we still have to deal with Uber Eats and Glovo take-away as well as room service orders. Working under that amount of pressure has been quite challenging, but it definitely brought the whole Food & Beverage team a lot closer.”

Ms Jaeger stopped for a while and thought loudly:“Adversity can transform into harmonious unity if there is will, dedication and a vision. The Corinthia family concept has played a big part in this.”

She then quickly added:“Another big part of my work is assisting the hotel sommelier, Jorge Silva, in managing Erva’s wine cellar. I had completed the WSET2 course while I was in London, but I knew practically nothing about Portuguese wines. Our cellar is huge and 95% local, so this has been an incredibly delicious learning experience!”

Insider Plus was conscious throughout that Ms Jaeger had an inner positive drive, so hearing her discern a positive curve during such serious adversities, effectively confirmed this.

Wanting to change the direction of this chat, Insider Plus asked Ms Jaeger if she had ever experienced an incident which worried her deeply at work. She did not wait a second before blurting out an episode: “The scariest situation I’ve experienced in the restaurant was when one of our guests had a very serious arrhythmia, a heart condition where the heart beats with an irregular or abnormal rhythm, and collapsed on the table. I remember it was a quiet lunch service and very early in the day, so they were the only customers in the restaurant at that point. Lucky for us, and for the guest, his wife was a doctor and she remained calm through it all, instructing us how to deal with everything. In seconds we were able to push the tables aside and bring a couch to the middle of the restaurant, so he could lie down while we waited for the ambulance to arrive. I think the whole thing did not last more than five minutes until they left with the paramedics, but it felt like hours to me.”

No wonder she could not forget that!

What kind of relationship does she enjoy with her fellow staff. “No problem, We do get along well. I learn a great deal from my colleagues, just by watching them, especially Cheila, our Restaurant Director.  Sometimes I wonder if I will ever be able to do all the things she does with the same level of confidence. She is a great mentor.”

Insider Plus wanted to zoom in Ms Jaeger’s character, provided. of course, she would consent. It did not prove difficult at all; she was all game. “I consider myself very much reserved and an introvert, except when I am talking to guests. Even with my colleagues, I know I am often misunderstood. My manner of speech is sometimes quite direct and sharp, which can be perceived as harsh, impatient or even rude, but it is never intended as such, never. However, I found out that this work brings out the best in me. I learned from my first job as Front of House that the restaurant is like a stage. It’s not just about the food, it’s not just about getting the right timings according to the LQA standards; it’s also about warming up to people. It is very challenging to approach a table and create empathy, even intimacy, without crossing the line and become intrusive or obnoxious. You have to be able to read people and realise how far you can go to create a meaningful connection, even if it is only for a couple of hours. For me it involves a great deal of honesty and sincerity in your words, your tone, your posture, your demeanour. People will always see the truth behind a fake smile. I find it quite liberating; I forget myself, because I am there for them, to make them feel special and looked after.”

It was obvious that Ms Jaeger was happy with Corinthia Lisbon, but we wanted a confirmation. We were perfectly right!  “This is my home away from home. I don’t believe I’ll ever go back to Brasil. Being in a big company like this gives me a sense of purpose and belonging. It makes me look ahead and wonder about new adventures and opportunities. I’m here now, but in three years, who knows? Maybe Corinthia Dubai, Brussels…I’m working really hard on my French!”

As a finale, Insider Plus asked whether she would recommend Corinthia to others as a place of employment, or as a place of relaxation or enjoyment ?

“Undoubtedly for both. You couldn’t possibly find it better anywhere else. As an employee, you know your interests are being looked after, and you are also given the means and conditions to execute your job to the best of your abilities. Corinthia values people and invests in your personal and professional growth. And as a place of relaxation and enjoyment…wow, have you seen our spas, our facilities, our rooms…and the care you experience. Every guest is special and forms part of the Corinthia extended family.”

Very fit conclusion for our chat!