It’s a normal weekend for Stefan Hogan: One hundred and sixty covers for a four-course charity dinner, a baptism lunch for 20, and a signature dish supper for 30 journalists – bloggers in town to promote Air Malta’s new routes. And Rickshaw, Corinthia Palace Hotel’s revered Asian restaurant will be buzzing as usual.

I’ve managed to prise the architect of the hotel’s much celebrated cuisine away from the kitchen for an hour, to find out more about this award-winning chef, and to hear what makes him tick. While Stefan is known as something of a disciplinarian by his admiring staff (which executive chef isn’t?), he speaks in gentle tones, with a hint of Irish brogue (the result he says of a subconscious pull towards his Irish ancestry).

Stefan, like many, is the product of the last chapter of Malta’s colonial story. In the early1960s, Dad Michael was serving with the British army; Mum, Mary-Anne, hailed from the small town of St Andrews. They met near the British barracks at Jessie’s Bar where she worked – an iconic cafe that stood for more than a century, now long gone. With employment opportunities for British citizens limited immediately after Malta’s independence in 1964, the young couple moved to northern England, where they married in 1968. Stefan was born a year later in Liverpool.

His British infancy would be short-lived. With Mum keen to return to her homeland, the family came back to Malta in 1973. An avid reader, Mary-Anne loved the glossy British lifestyle magazines of the time, and around the age of 10, Stefan became entranced by their colourful food features, so much so, that one recipe for cookies became his first inspiration to first put on a cook’s apron.At fifteen, a school visit to a food factory heightened his interest in commercial cooking, and a year later he was enrolled at Malta’s catering school. At the course’s end, in the summer of 1987, Stefan had his first job in an upmarket Italian restaurant in St Julian’s. It was a start, but it was his next appointment at Holiday Inn – that he began to find his feet. As a commis chef he was on  the first rung of the ladder – food preparation and basic cooking.

“It was then I realised I was good at what I did. I was doing things instinctively,” he says, before recounting that one vital influence at the time was a book that became a bible for many chefs – Buffets and Receptions. “It cost a month’s wages, so I asked if I could pay for it in instalments.  I would sit in bed at night and read about the classics of European buffet cuisine. The next day I’d say to Chef: “Let’s try and do this, bone and stuff a whole pork, create a chicken pate’ with gelatin, let’s add petals as a garnish. I loved the classics and I saw how I could reinterpret them.”

Stefan’s yearning to learn more saw him leave Malta for the UK in 1989, working first at Holiday Inn “a big, tough, strict kitchen”,  before moving on to cook classic British as a sous chef at a country manor hotel in the Branson Virgin Collection.  At 23 the path ahead diverged; offered a junior sous chef post in Ireland, Stefan turned it down; it was time to head back to the Mediterranean, and home.

In 1993 the Corinthia Palace Hotel was undergoing huge refurbishment, and its Executive Chef was on the lookout for new talent. Stefan was the perfect fit: energised, ambitious and creative, and with a CV hard to match. Side by side with the acclaimed English chef John Hornsby (who Stefan acknowledges today as his most inspiring mentor) they set up the Corinthia Palace’s new kitchen. There the story of Stefan Hogan and Corinthia began. Twenty five years later Stefan – whose skills and artistry for Corinthia have been regularly exported across the Group, to London, Tripoli, and St Petersburg – is as passionate in his work as he has ever been.

“I’m 49 now, but my team are young, and very talented, and they keep me young. Yes, I ask a lot of them; it’s important to instill a sense of discipline. I’m quite unforgiving in some ways, as I expect everyone to be doing their absolute best.One thing I’m so grateful for, and without which I wouldn’t be where I am today, is the constant support of my wife Yvonne, who has to endure my culinary obsession, and my daughters Chantelle and Shannon. They are my rock.”

As our conversation closes, I ask Stefan what he does away from work; a typical holiday perhaps, away from the stresses and strains of running arguably Malta’s finest hotel restaurant offerings.“Last September I spent two weeks working at Le Manoir aux Quat’Saisons” [the Michelin-starred restaurant in Oxford renowned for its haute cuisine], says Stefan nonchalantly. Was this in his private time, a busman’s holiday? Of course. Such is this man’s passion for his art. “Whenever you walk into someone else’s kitchen you walk away with new ideas. You come back energised.  I’m thinking about a holiday working somewhere in France this year. Their cuisine, at its best, is still of course the ultimate, and you never ever stop learning.”

“The goats cheese is fresh, from a small local farm. I love that we can support these small industries in Malta. We make jam from the lemon and that adds a hint of citrus with a sweet end note. It lifts the taste of the tomato and the cheese. The watermelon is compressed and frozen, concentrating the flavour into each forkful.” 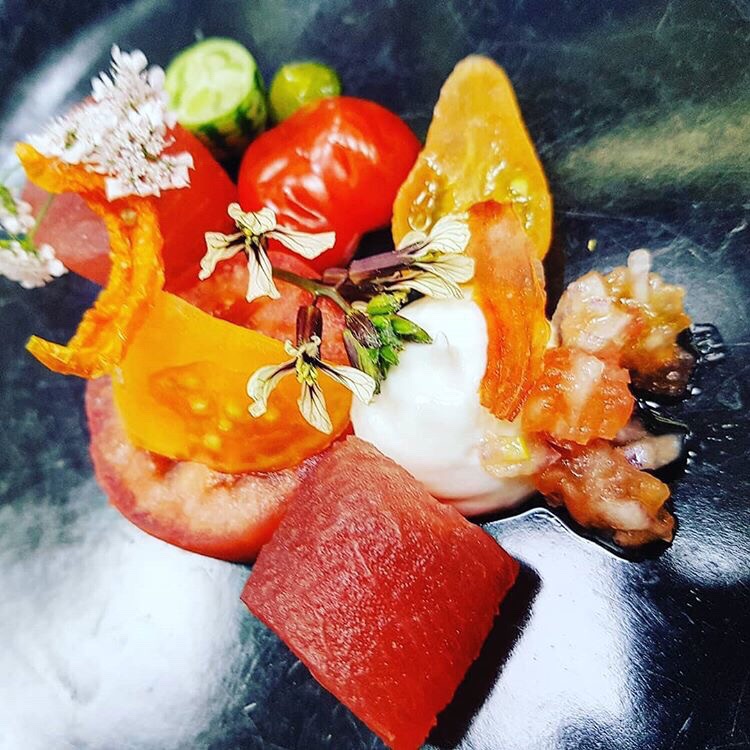 Veal tenderloin and sweetbreads with polenta and seasonal vegetables

I love this dish of butter-roasted veal tenderloin with veal sweetbreads. They’re slow cooked and then fried in nut brown butter to accentuate their natural sweetness and creamy texture. We serve it with creamed white polenta, seasonal vegetables and a rich Madeira jus.

The  sweetbreads are soaked in milk overnight, rinsed and placed in a vacuum bag with a sprig of thyme and cooked for an hour at 60 degrees. In a pan I toast some curry powder, turmeric and salt, and then add oil. Allow to cook for a few minutes than leave to cool, and strain to get an infused oil. Fry the sweetbreads in the oil until caramelised, in a separate pan heat a knob of butter when the butter starts to foam, add some sherry vinegar and a splash of lemon juice the colour should resemble a toasted hazelnut. Add the sweetbreads and season baste with the butter. Remove with a slotted spoon and drain off excess butter. The veal tenderloin is cooked in a water bath with butter and thyme for 2 hours at 52 degrees, then the outside is caramelized in aromatic butter to get a contrasting texture 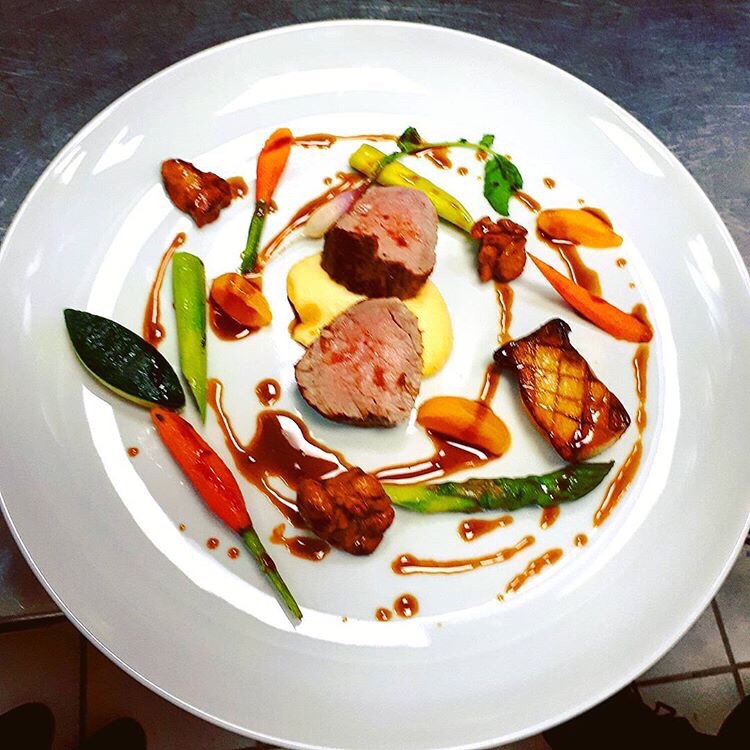 “I love the way the bright red prawns sit on top of the green risotto, with the asparagus tip and the sautéed kale. The use of the whole prawn to make a fragrant stock enhances and elevates the taste. When you’re cooking, it’s about the love that goes into the dish, take for instance risotto: it needs so much attention to get right, ladling the stock slowly, it’s a 25-minute process and it has to be done so delicately, adding the butter, letting it sit. A diner will see it and taste it, and know instinctively it’s been made with love and care.” 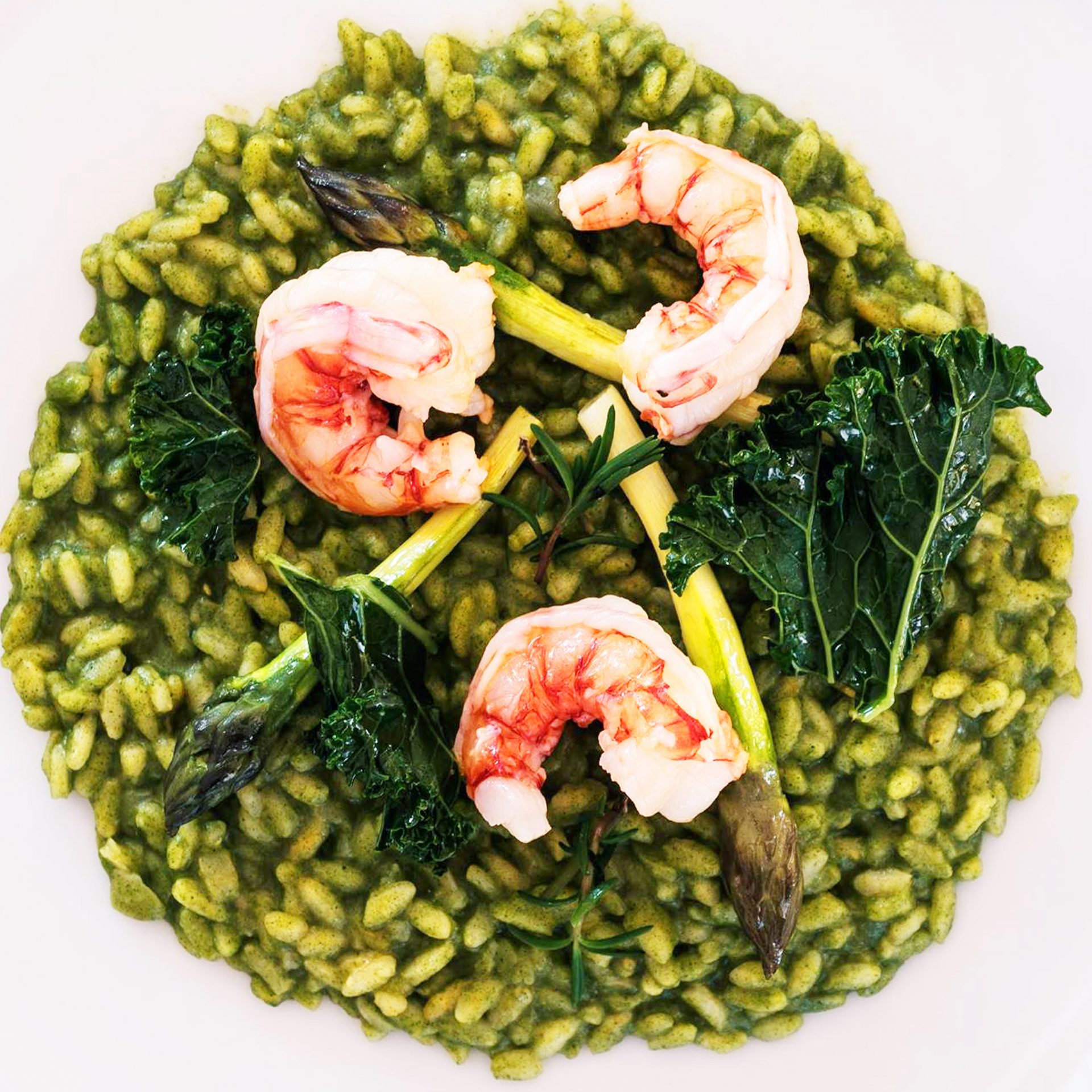 “For the parcel component I draw inspiration from our neighbours in North Africa. The legs are slowly braised in red wine and spiced with cinnamon, cumin, nutmeg, ginger, cardamom and turmeric. Once cool, we take the meat and season with honey and create small parcels (similar to a Moroccan pastille). The loin is boned and wrapped in lard and poached, we then lightly fry to crisp the fat on the outside that renders during cooking to keep the loin moist.” 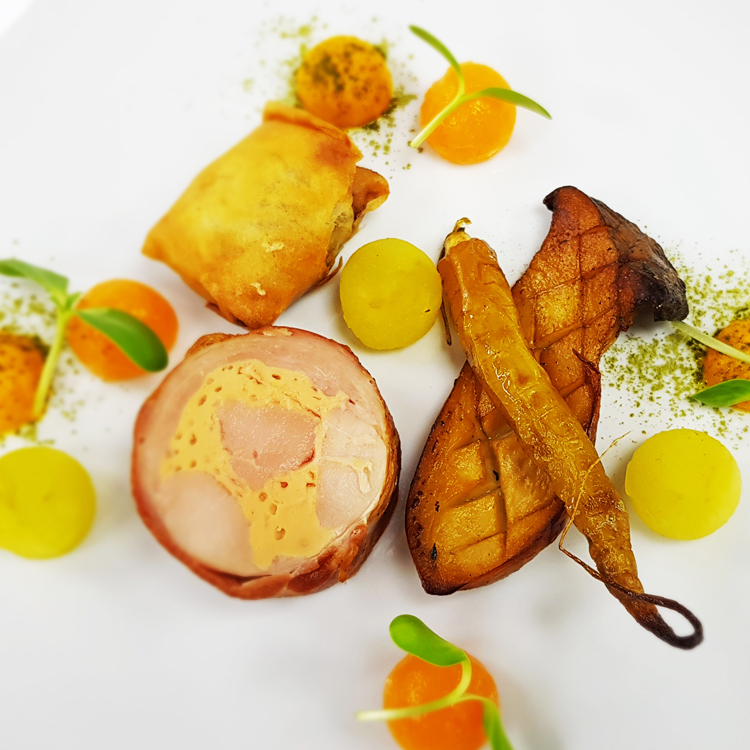 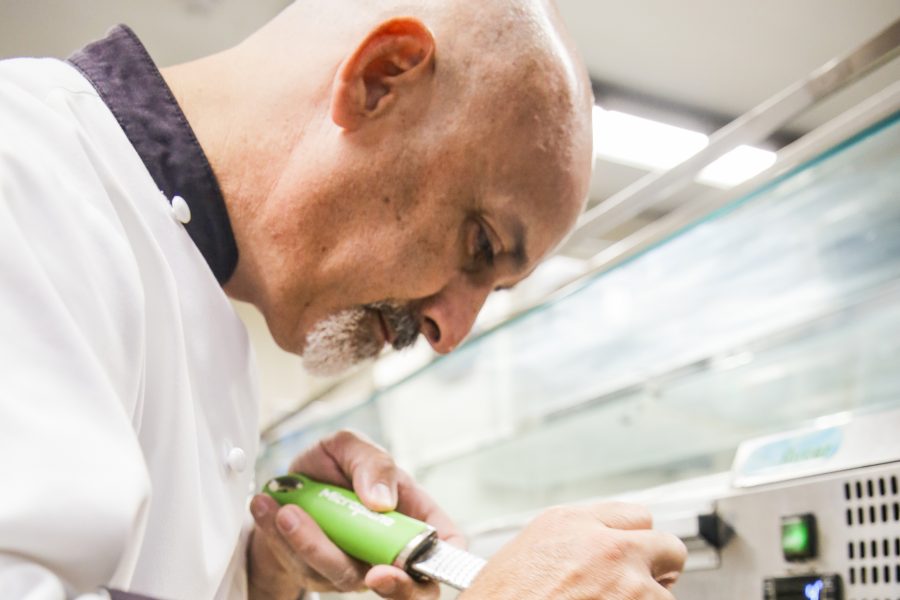 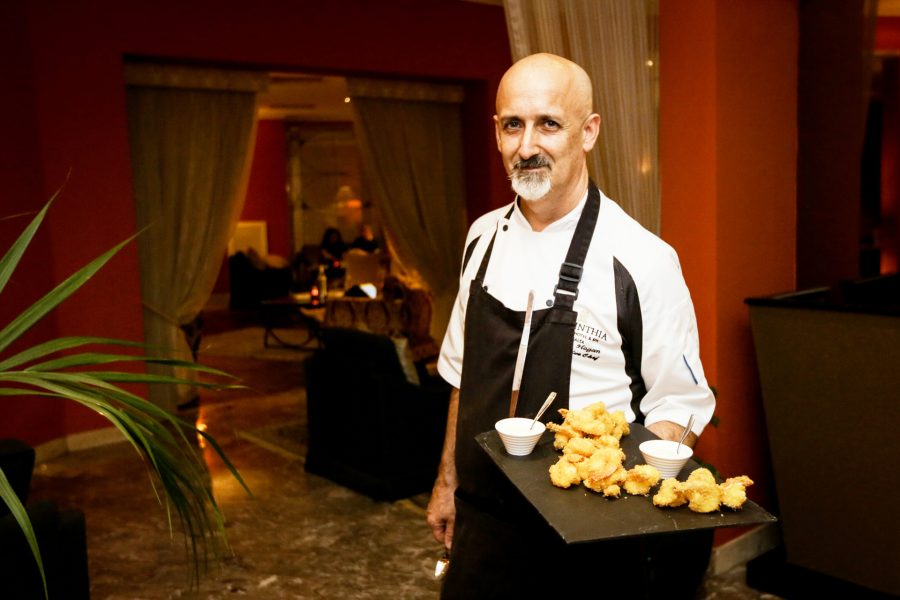 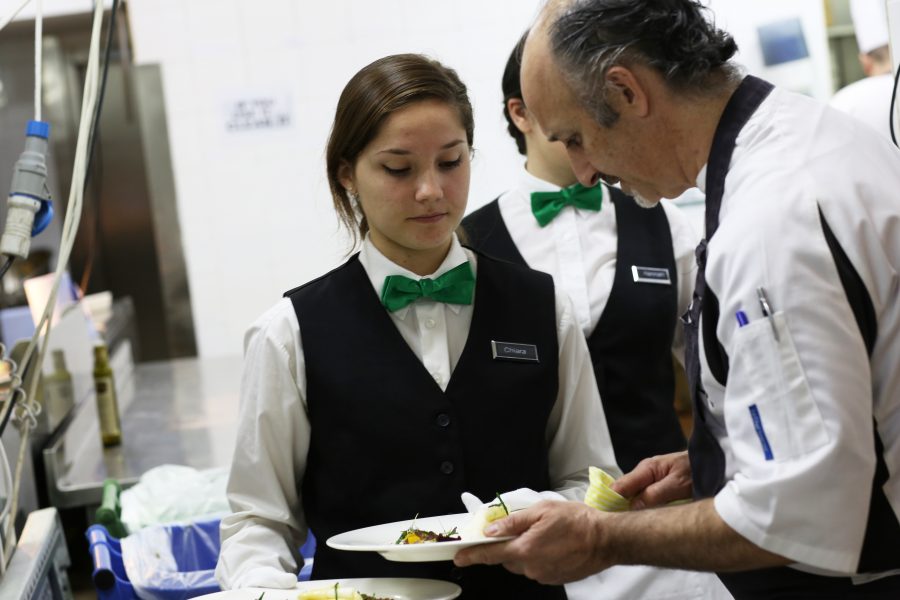 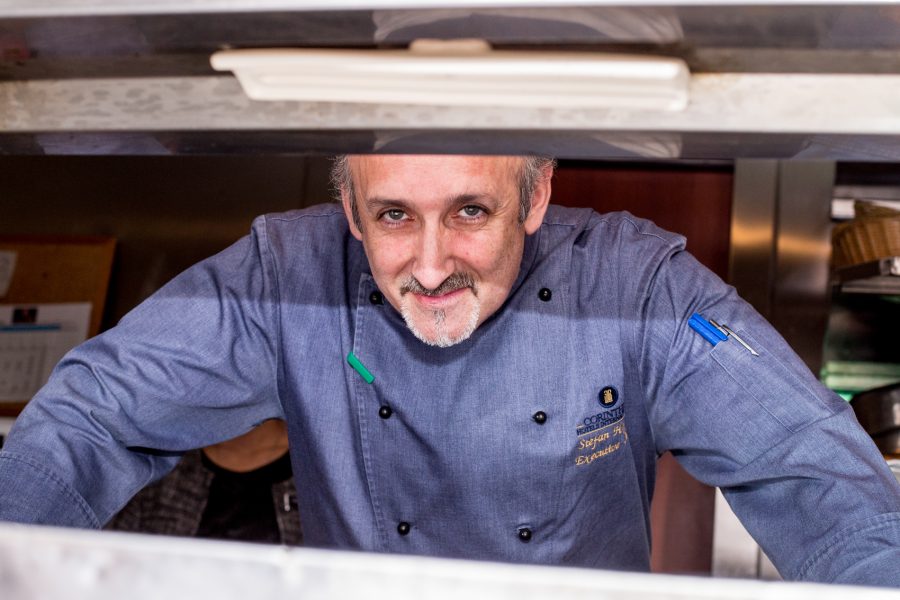